Daniel - diagnosed Feb 1999. Initially started PC Spes until it was taken off the market in Feb 2002. PSA jumped from 4 to 6 within 3 months after stopping PC Spes, however, he was feeling very well and energetic since beginning program on the 2nd week of Jan. 2002. Aches and pains dramatically reduced. PSA rose from 4 in January 2002 to 12.9 in September 2002, knowing the PC Spes was wearing off and the nutritional program was causing biochemical changes to his benefit.

Also, because he felt so good and because the PC Spes would take about 18 months to get out of his system, it was estimated that the PSA would not decline until a year after stopping PC Spes, he was willing to go with it because the prostate itself showed improvements upon examinations.

PSA remained at 12.9 for an additional 4 months. In January 2003, PSA was 11.3, which surprised everyone because the estimate was more accurate than anticipated. May was 10.9, and has continued to drop. He has been on dosage 2, feels great and is happy to see the PSA drop.

No I do not belong to the PC Spes chat line. I am happy with what I learned when I was participating. I agree with you in everything you say. I have heard MANY times that those who took Spes will have a higher PSA, even after the cancer is gone.

When PC Spes was no longer available my PSA went over 14.6 very quickly. Then I reduced it again with DES. Then the nutritional program came along and I stopped DES. My PSA went up to 12.9 and is now slowly coming down. My last reading was 10. I feel great, wounds heal faster, and virtually all my old age symptoms have gone away (I'm 63). My doctor loves to feel my prostrate because it is so smooth. I choose NOT to have a biopsy as I think it is an insane procedure. I would do an ultra sound if I could find someone in Oregon that could interpret it.

I feel bad for anyone who goes to Lupron as I understand it kills your testicles and sexuality. On the nutritional program, I have a WONDERFUL sex life. Thank you Fred for that! My two brothers had surgery and both lost their sex life. 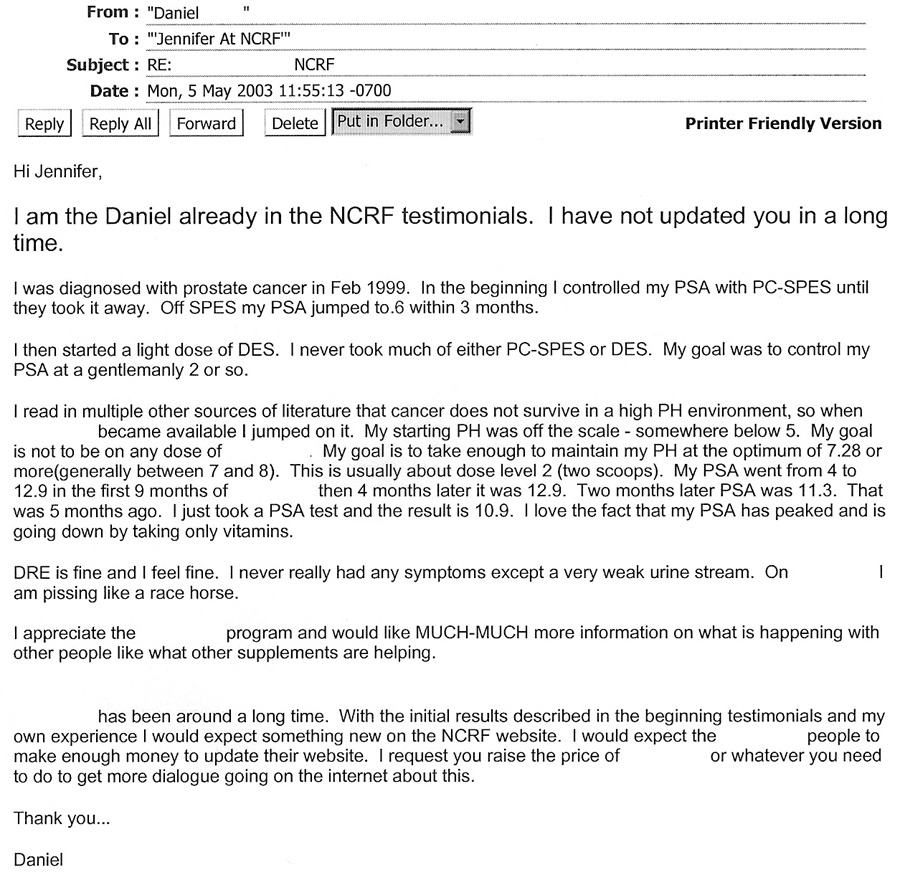