The risk of cancer associated with popular CT scans appears to be greater than previously believed, according to two new studies published Monday in the Archives of Internal Medicine.

The findings support caution against the overuse of CT scans and other medical technologies that use radiation. The studies also bolstered the rationale behind controversial new breast-cancer screening guidelines, which pushed back the recommended age for annual mammograms to 50 from 40. Mammograms also use radiation, but in smaller doses. 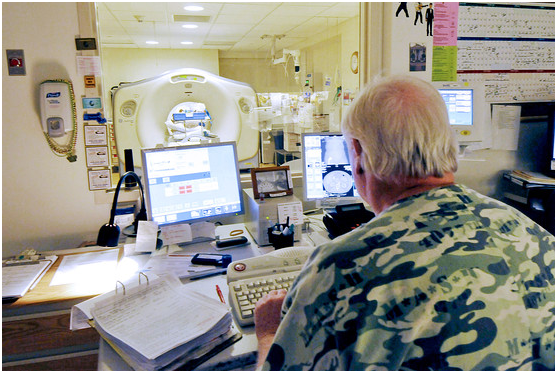 An imaging specialist looks on as a patient, behind window, undergoes a CT scan Aug. 6 at Falmouth Hospital in Falmouth, Mass.

The CT -- short for computerized tomography scan -- can detect injuries and tumors. Its use has tripled in the U.S. since the early 1990s to more than 70 million in 2007. Though it has long been known that radiation increases a person's chance of getting cancer, the exact risk of these scans wasn't clear.

One of the studies, which examined more than 1,000 adult patients at four hospitals, projected that the dose of radiation received in a single heart scan at age 40 would later result in cancer in 1 in 270 women and 1 in 600 men.

Risks were lower for those who received a head CT scan: 1 in 8,100 women and 1 in 11,080 men would likely develop cancer from the radiation, the study said.

Doses of radiation from the scans varied wildly, according to the study, even within the same procedure at the same hospital.

Some patients got only one-tenth the radiation that others got, according to Rebecca Smith-Bindman, the first author on the study and a professor of radiology and biomedical imaging and epidemiology and biostatistics at the University of California San Francisco.

The findings raise questions about why radiation doses differ, and whether the variation is acceptable. "These are doses we should be concerned about," said Dr. Smith-Bindman. "They don't have to be this high."

The variation in radiation exposure for any particular CT procedure is likely due to such factors as a lack of standardized settings, and differences in how the radiologists and technologists use the technology for different patients, according to Dr. Smith-Bindman.

A radiation dose that is too low, for example, could yield a picture that isn't clear enough to reveal abnormalities.

The second study analyzed data from several databases and estimated that 29,000 future cancers could be related to CT scans received in 2007, with the greatest number of cancers projected in the abdomen and pelvis.

The cancer risk was greatest for young patients, this study found. For instance, a female who received an abdominal scan at age 3 had a 1 in 500 chance of developing cancer because of the radiation from that scan. That figure dropped to 1 in 1,000 by age 30, and 1 in 3,333 at age 70.

Overuse of radiation-based tests is a concern when they are performed to diagnose patients who have a known abnormality. But the concern is even greater when they are performed for screening purposes, said Amy Berrington, an investigator at the National Cancer Institute and an author on both papers. "You're exposing a lot of healthy people" to radiation," she said.

The doses of radiation received from mammograms are much smaller than from CT scans, yet the small cancer risk should be weighed when deciding whether to undergo routine breast-cancer screening, Dr. Berrington said.

In loosening the mammogram guidelines last month, a federally funded task force of physicians cited, among other factors, the potential harm from testing.

Despite these concerns, CT scans provide "great medical benefit," she said. "On an individual basis, if the scan is justified, then the benefits should outweigh the risks."

Data for a chart on the rising use of CT scans that accompanies this article were from the IMV Medical Information Division. The information is incorrectly attributed to the National Council on Radiation Protection and Measurements.