I am looking forward to a full recovery with the help of Fred's vitamin program. My life, which was turned upside down from cancer, is now getting back to normal. My children notice that I don't look or act sick, that is very important. My name is Tracy, I am 36 years old, 118 pounds, a wife and mother of 2 children. I have been a kick box instructor for 2 years. I run about 5 miles every day. My eating habits are good, not too much meat. I mostly eat veggies, fruit and pasta. I work part-time in my children's school and on weekends my family and I take hikes, we love being together.

In January 2001, I was diagnosed with pancreatic cancer with mets to the liver. Since the cancer traveled, I could not have surgery. My bile duct was blocked so the doctors put a stent in.

I started chemotherapy January 22, 2001, and was wiped out. I was nauseous, tired and depressed. My chemo treatments are scheduled every 2 weeks, each time two days in a row. In the beginning of February 2001, my wonderful husband found out about this nutritional program. When I first looked at it, I thought that I could do the first dosage, but never would be able to do the 4th dosage.

Well, I am doing the 4th dosage !! I've been on it 9 weeks now. I feel great !! No more nausea or tiredness. I've started running and lifting weights again. My hair never fully fell out, and at this point is starting to fill in again.

But the best part is that my CAT scans are showing such great progress. The liver tumors have died and are liquefying. The tumor in my pancreas is shrinking and the blood supply is being cut off. Of my 3 tumor markers, two are now at normal levels, the third has reduced from 5,000 down to 1,300.

They feel like they have their mom back.
What a great thing !!!

Good luck to everyone who is faced with cancer. I will keep you posted of my continued progress!

If I can help anyone or listen, please contact me. We are all in this together.

January 16, 2001 - showing advanced involvement with little hope for improvement. - 3 pages
May 7, 2001 - showing extreme reduction and liver almost 100% clean - 1 page.
September 20, 2001 - Cat scan shows no evidence of cancer, there is an infection and is being resolved.
Second week of Dec. 2001 - CAT - showed two pin dots, blood work showed no indication of cancer
Third week of December 2001 - PET scan - negative findings of total body scan, no cancer found.
Second week of January 2002 - oncologist determined that the stent can come out, it is no longer needed.

After the Dec 2001 test results, Tracy basically stopped the program for quite a while, then started them again and took a few here and there, but nothing consistent. She felt confident that the cancer was gone and that she no longer needed them, she was never told anything different, so she felt that she did not need them.

Final UPDATE: We learned through a website post that Tracy had passed away on Dec 10, 2002. We were devastated because we were never aware that there was any problem. When we spoke to Tracy, she told us that she was doing fine. At one point, we spoke to her on Halloween 2002, she was a little tired because she said that they were giving her "Gemzar" as a safety precaution, but she was going out with the kids to go trick-or-treating. I was concerned because we saw in the past with other people where Gemzar was related to those who had rising CA19-9 counts when autopsies later showed that there was no cancer evident, so, wonder about whether she had a true reoccurrence because the statement was based on the CA19-9. In the post, her husband said that he never told her that she had any reoccurrence, she was never aware that she had any problem. We do not know any facts other than the post. We made attempts to reach the family, with no response. We are very sad to hear this news, yet we do not know the accurate information, anything we write here would be a guess. Our hearts go out to Tracy, Mike and their children, as well as the family, they are all wonderful people. 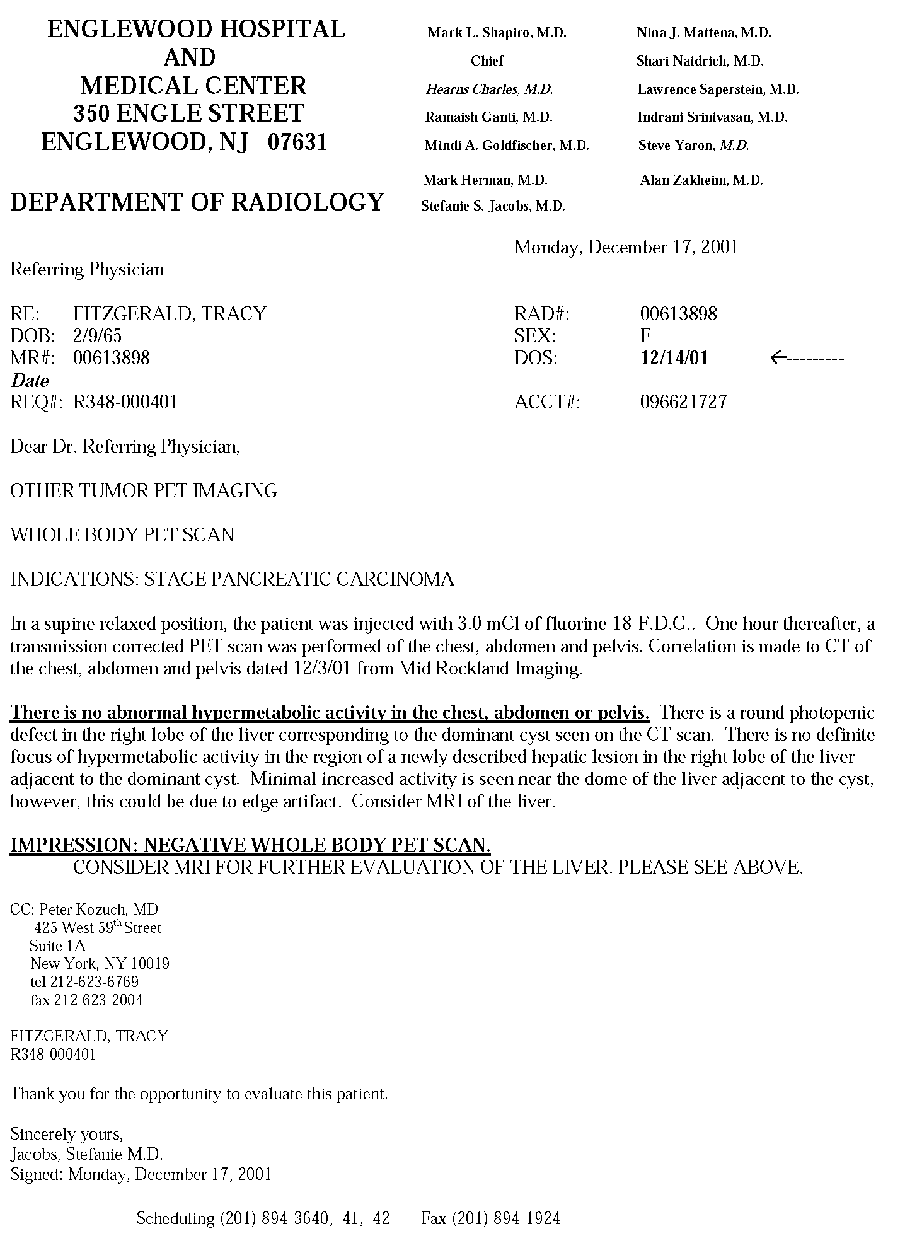 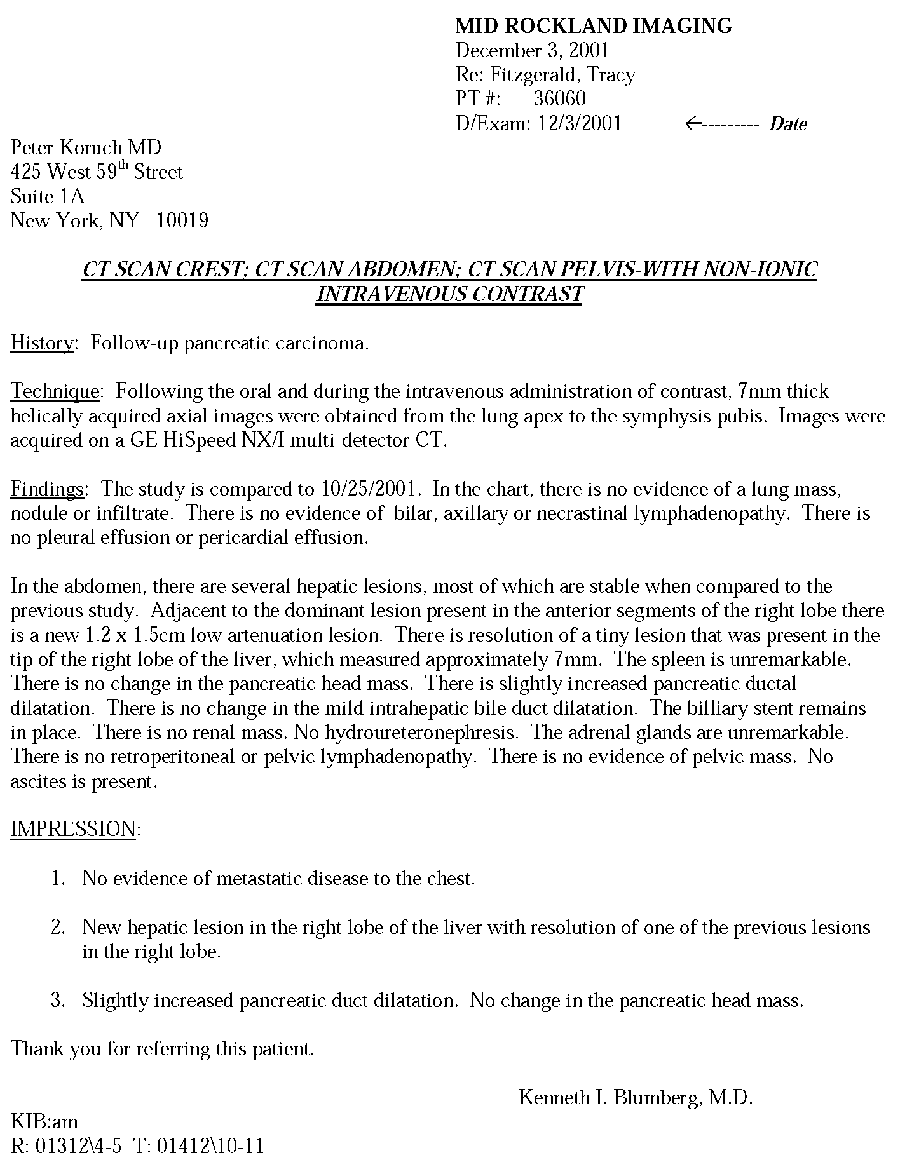 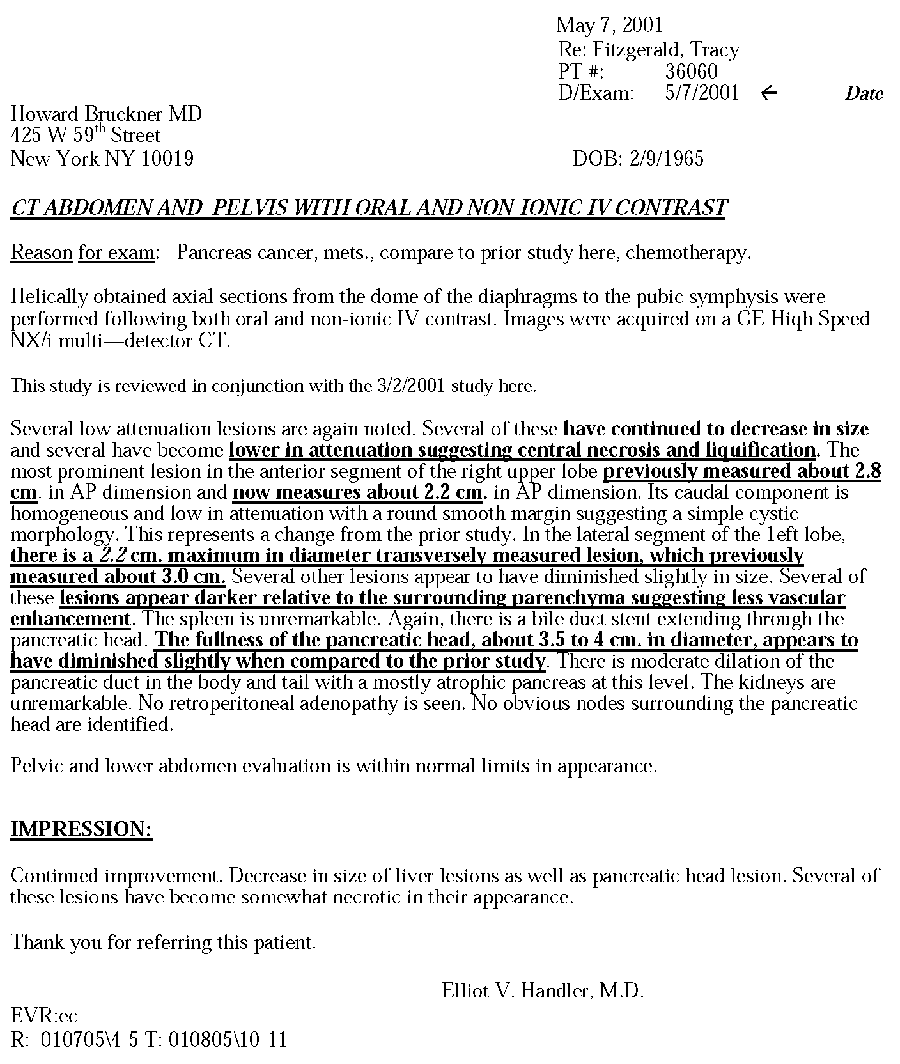 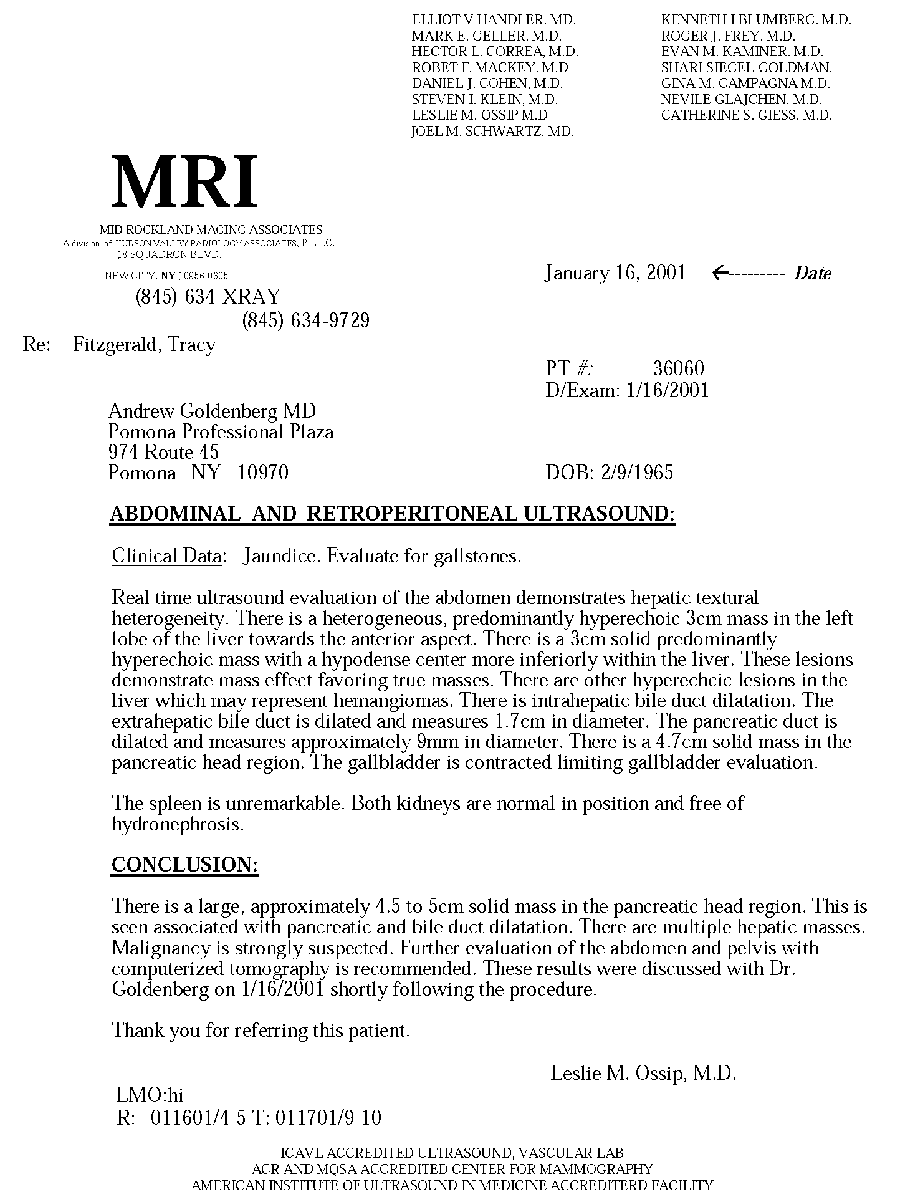 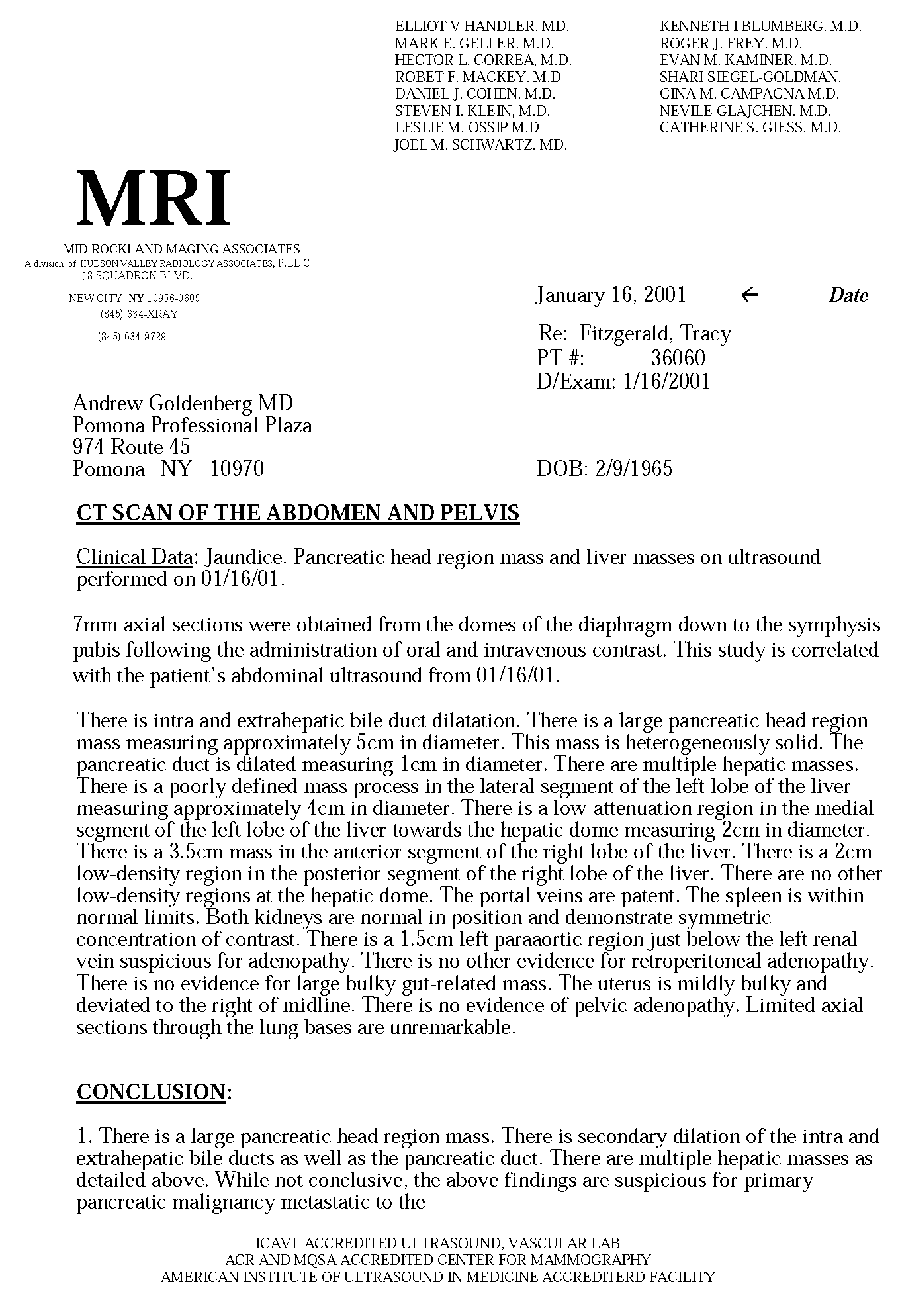 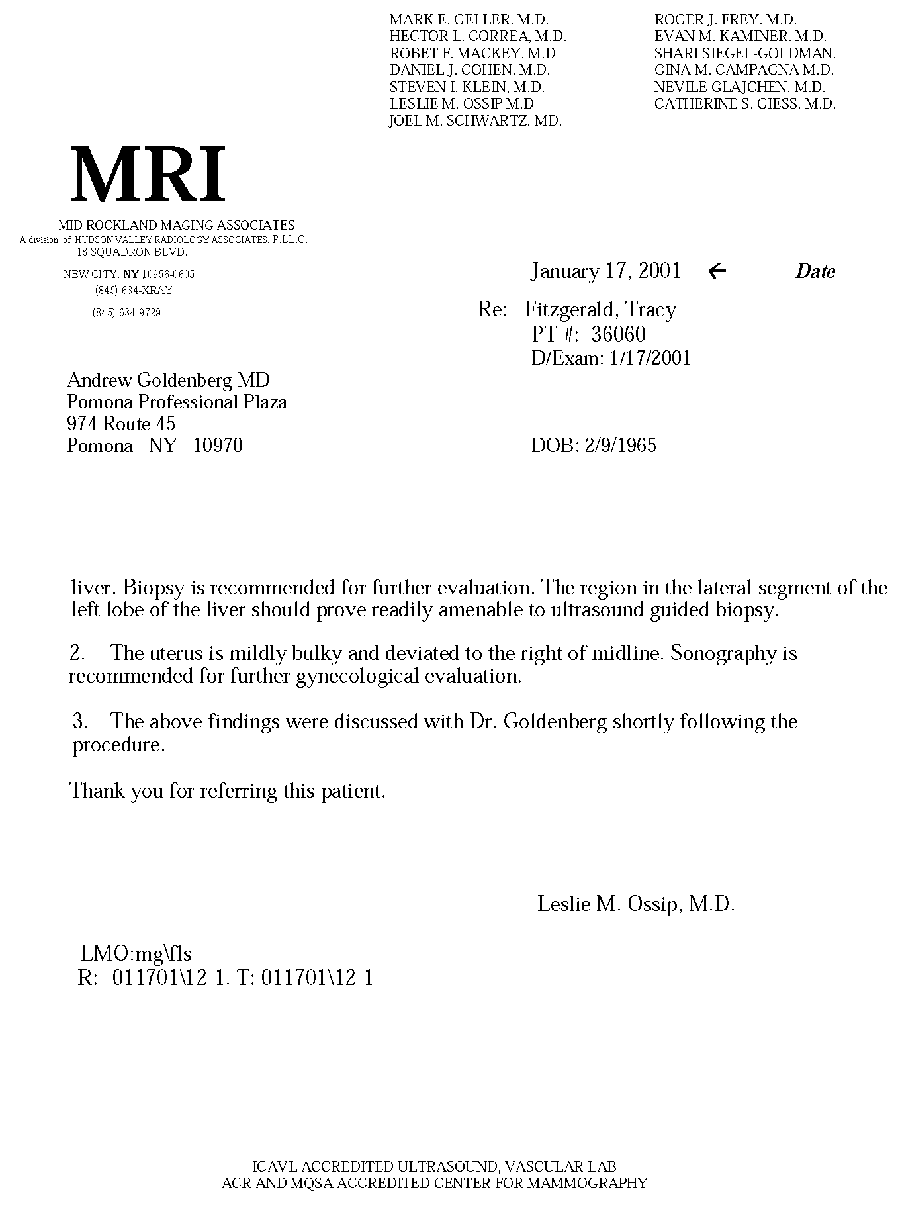