Joe, born 1923, Dx October 15, 2003: 5 cm on pancreas head, 5 lesions on liver, related tumor in neck, pelvis and abdomen. Because of the involvement, the doctor said that he would not offer any chemo nor radiation because nothing will help him and most likely hurt him, advising that the expected survival would be 3 months to 3 years at best.

After speaking with the DR. Joe was faced with this problem he had to make decisions regarding his animals. He began to make plans to sell them to someone he knew he could trust in taking care of them properly. His primary MD spoke to his wife, he kept stressing that this disease was very serious, while not coming out and giving them definitive answers. His wife asked about hospice and pain management.

After studying up on this disease at JHU message board. The Dr. responded with saying he would be able to take care of that when the time comes. His wife found it most distressing that she had to do research on the disease on the internet because the doctors provided no information to Joe nor his wife.

Tiredness was the only symptom he was displaying at the beginning. At that time, Joe's Dr. ordered blood tests because Joe was on Lipitor. The blood work came back showing elevated enzymes, stopped the use of Lipitor, still, the Dr. was not pleased and ordered a cat scan and then came the horrible news of pancreatic cancer.

This was devastating because he was never sick before this, and his life was training horses and other animals various tricks for animal shows. He was very depressed as a result and began making plans for his demise.

His wife came to us on Monday October 27, 2003, we gave her samples of the program to see if that would help him. On Wednesday, the 29th, she came back to tell us that he was on the horse that morning and he wanted to go full force on the program. He worked his way up to dosage 6&8, still on dosage 8 today.

On Friday, 11/31/03, he said that he was feeling great. Was not feeling tired any more and was able to do everything he wanted to do. His wife was very frightened as she watched from the window as he walked back to the barn. Before taking the vitamins he looked as though he was having problems walking that far and would become breathless. It was like he had aged another 50yrs in a few days. The change was so dramatic once he started the vitamins. After two weeks, he was playing golf 4 days weekly and horseback riding almost daily.

He has regained all his stamina, walks and moves around more strongly now. Looking at him you would never expect that he is ill or is the age he is! By December, he was feeling so good that he was horseback riding every day, full of energy.

At the time of diagnosis His doctor wrote him off , told him there was not treatment for him and failed to provide medical records to the new attending doctor, although Joe did have important previous test results which would help the new attending doctor. He went for tests on December 11, which was his baseline with the new doctor. Earlier, after starting the program, his CA19-9 dropped to 56.

The December 11 tests showed that his CA19-9 reduced down to 17, AST reduced from 292 to 19, ALT reduced from 459 to 16, Cholesterol, triglycerides and other factors were great.

He felt great through Christmas, he started to schedule shows for the spring. When the temperature is too cold, he rides the horse in the barn

PET scan showed mixed results. The area in the neck and various locations showed a decrease or total diminish. The pelvic area and one area in the chest indicated a slight increase. Overall, it indicated a larger decrease than increase. He feels better than he has in a long time, maintains an attitude so positive that you can only be impressed by his motivational power. He is showing "0" symptoms. The doctor is wondering if the cancer is simply not affecting his body anymore.

The next PET scan and blood test will be interesting. Joe is looking forward to the next round of tests. All his wife can get out of him is that he feels better than he has in a long time! He is convinced he is going to beat this. To this day Joe is still playing golf almost daily and riding and tending to his animals. His attitude is wonderful.

Scroll down to see his documentation. 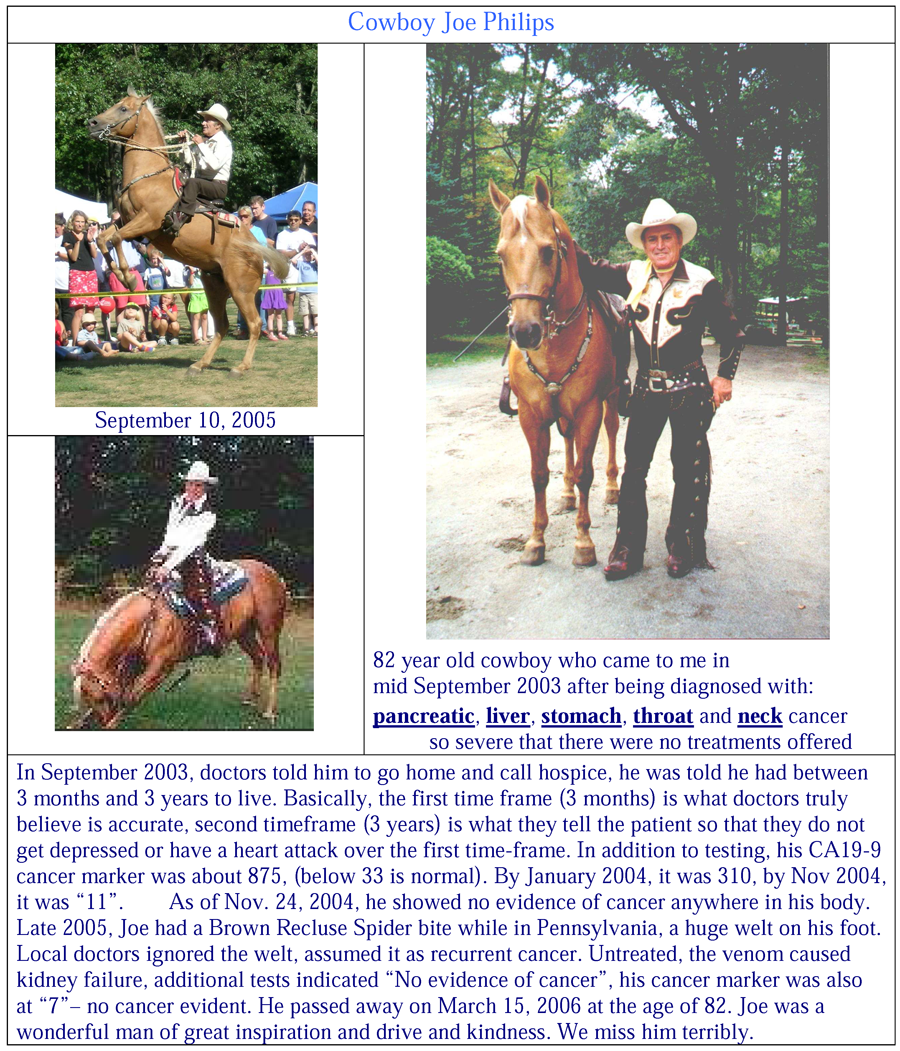 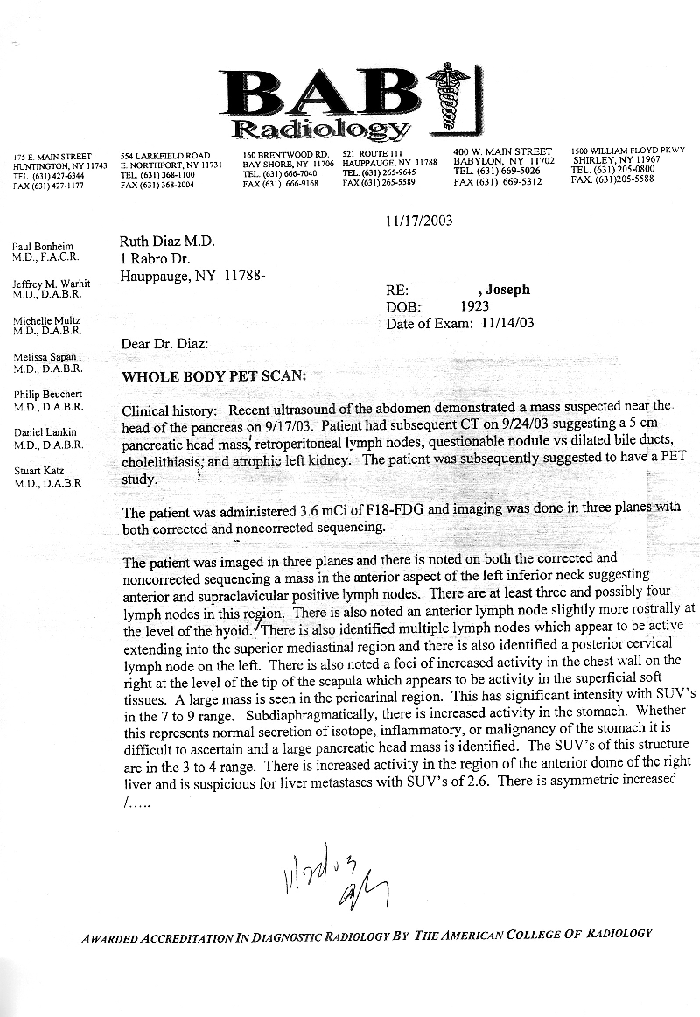 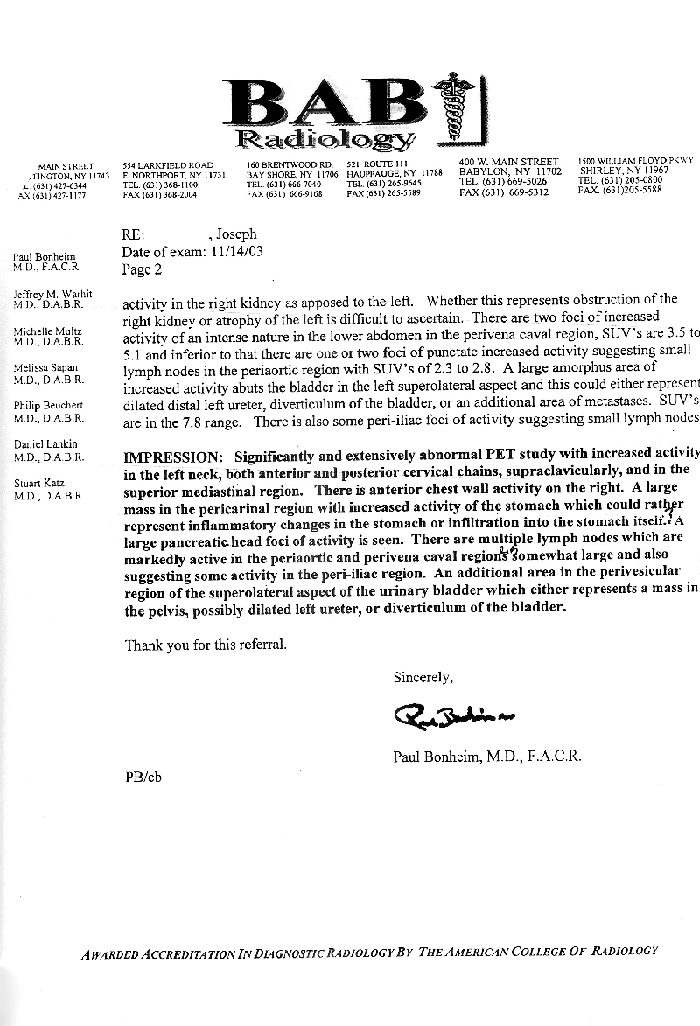 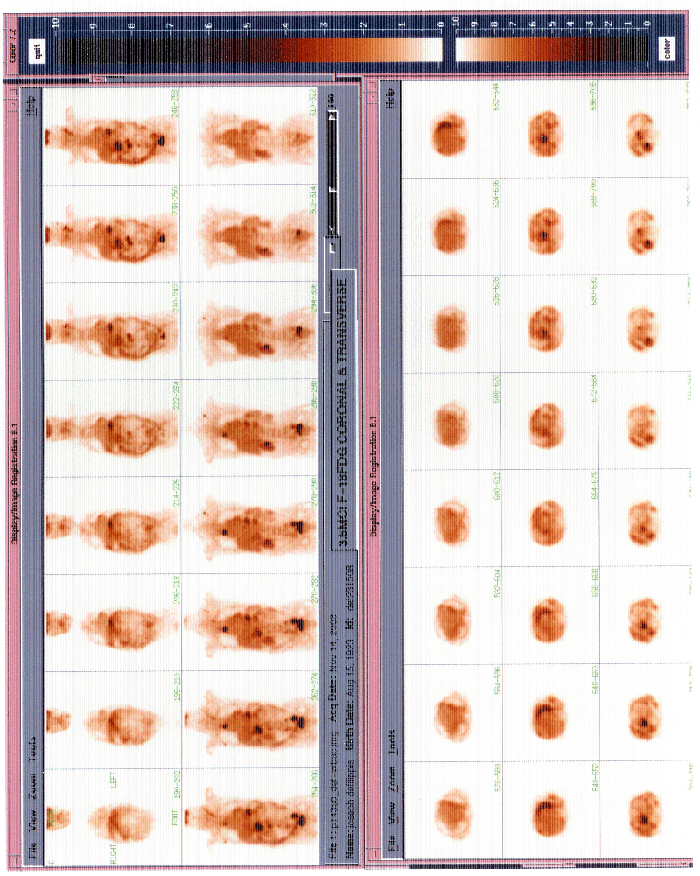 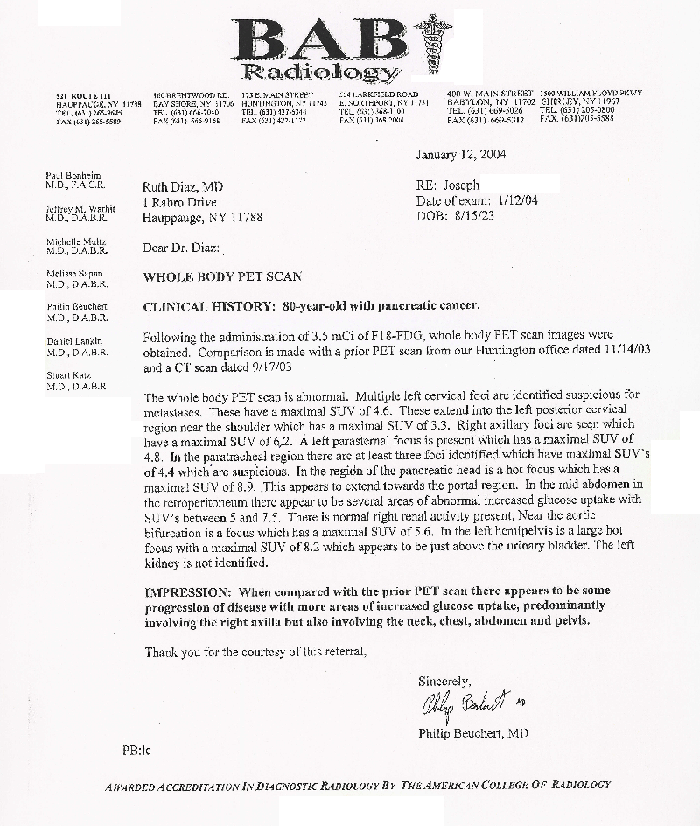 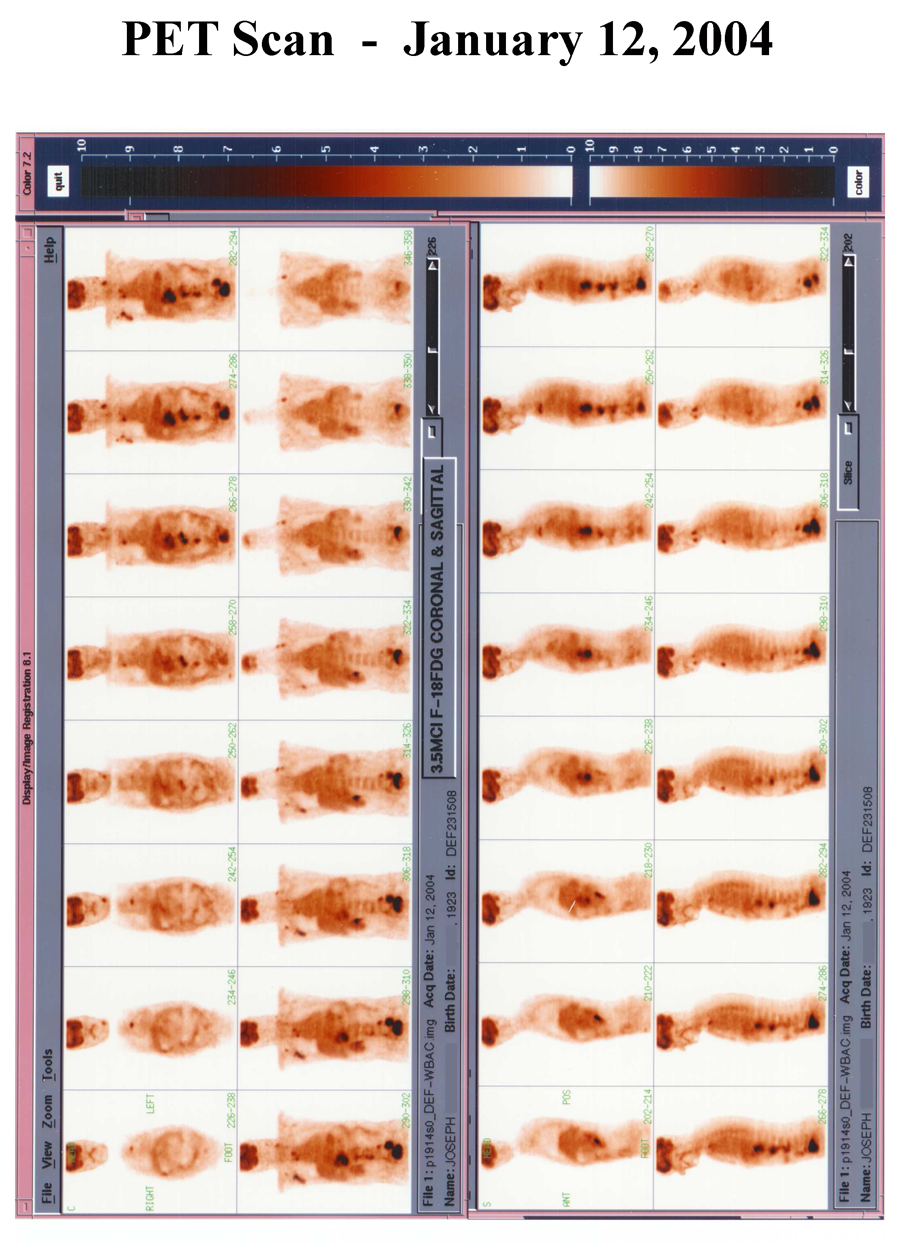 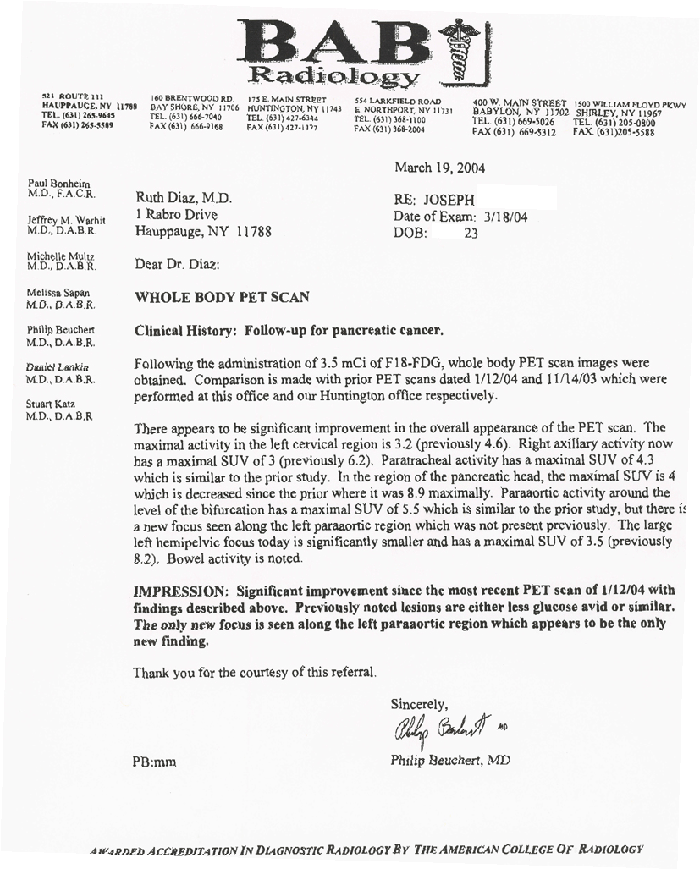 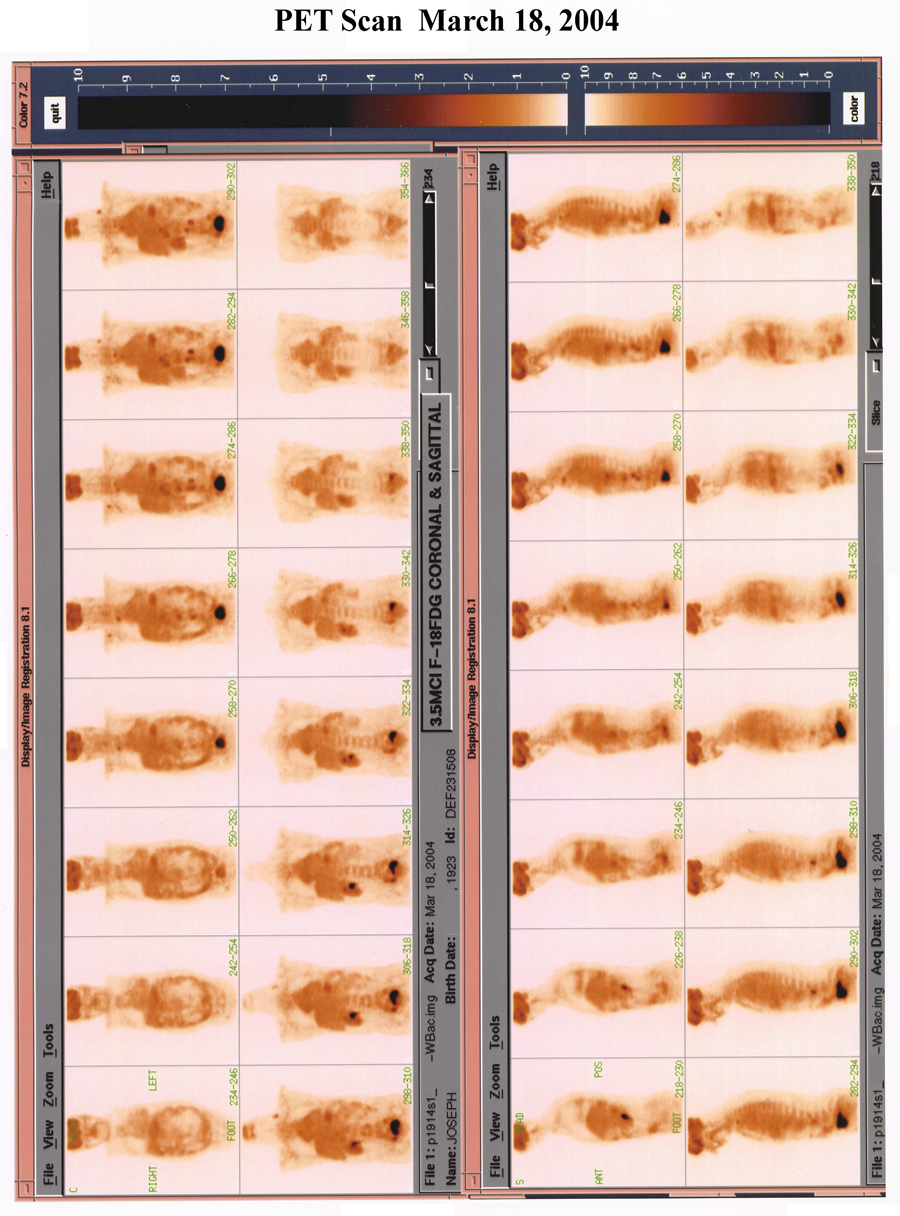 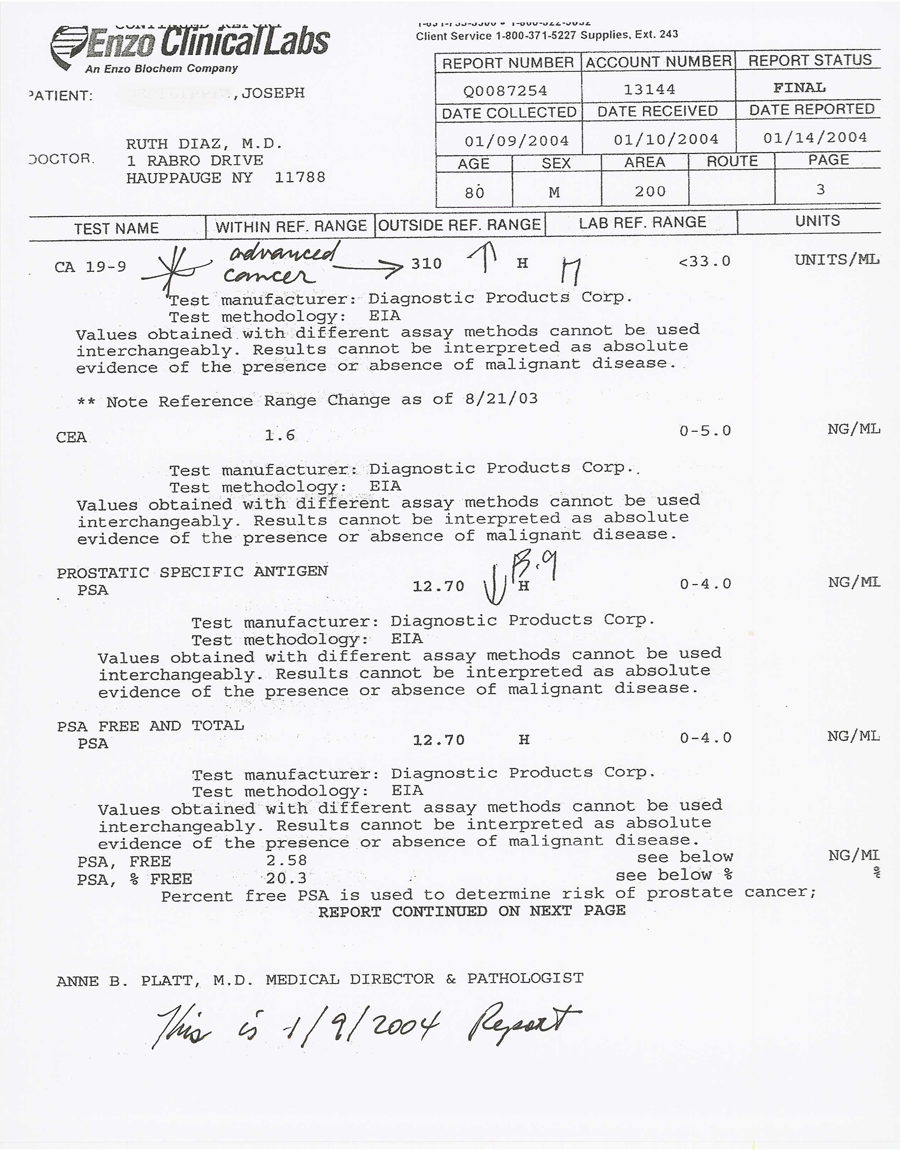 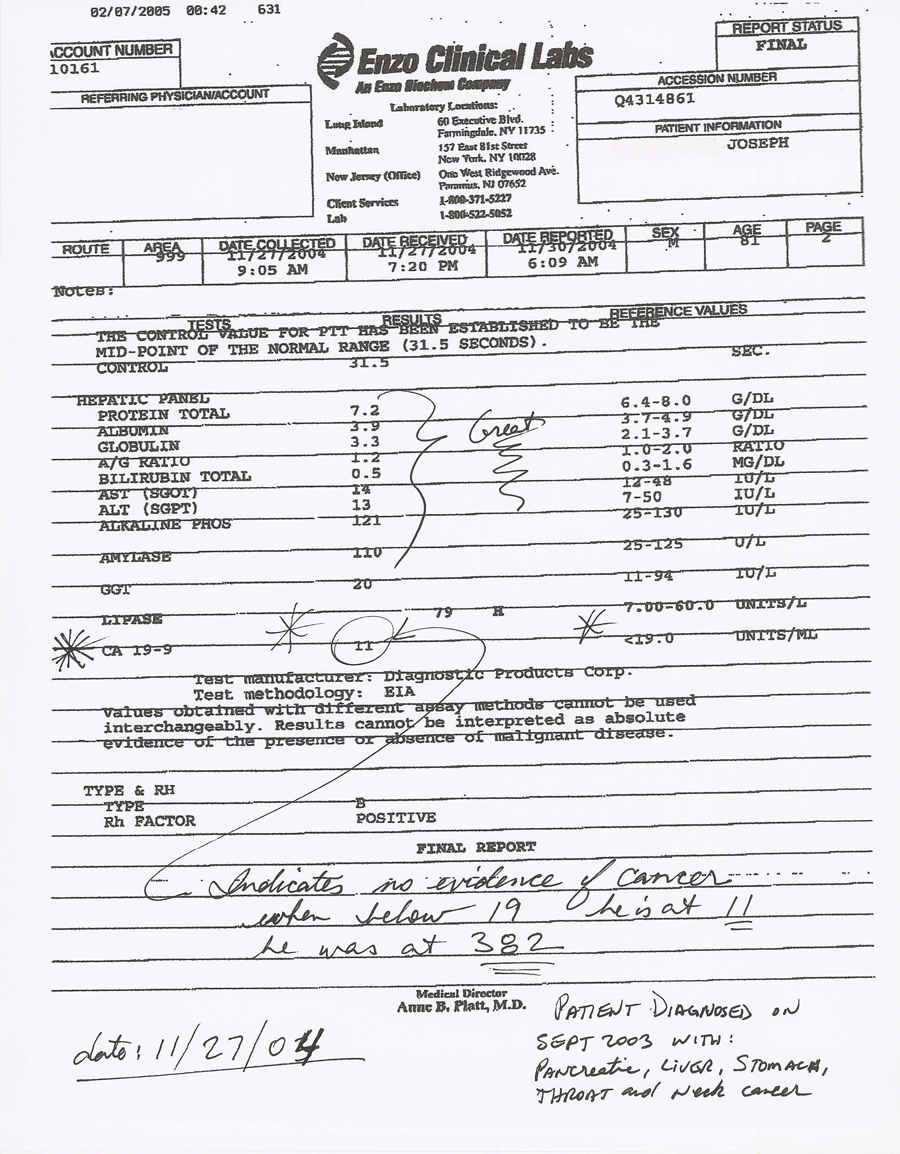 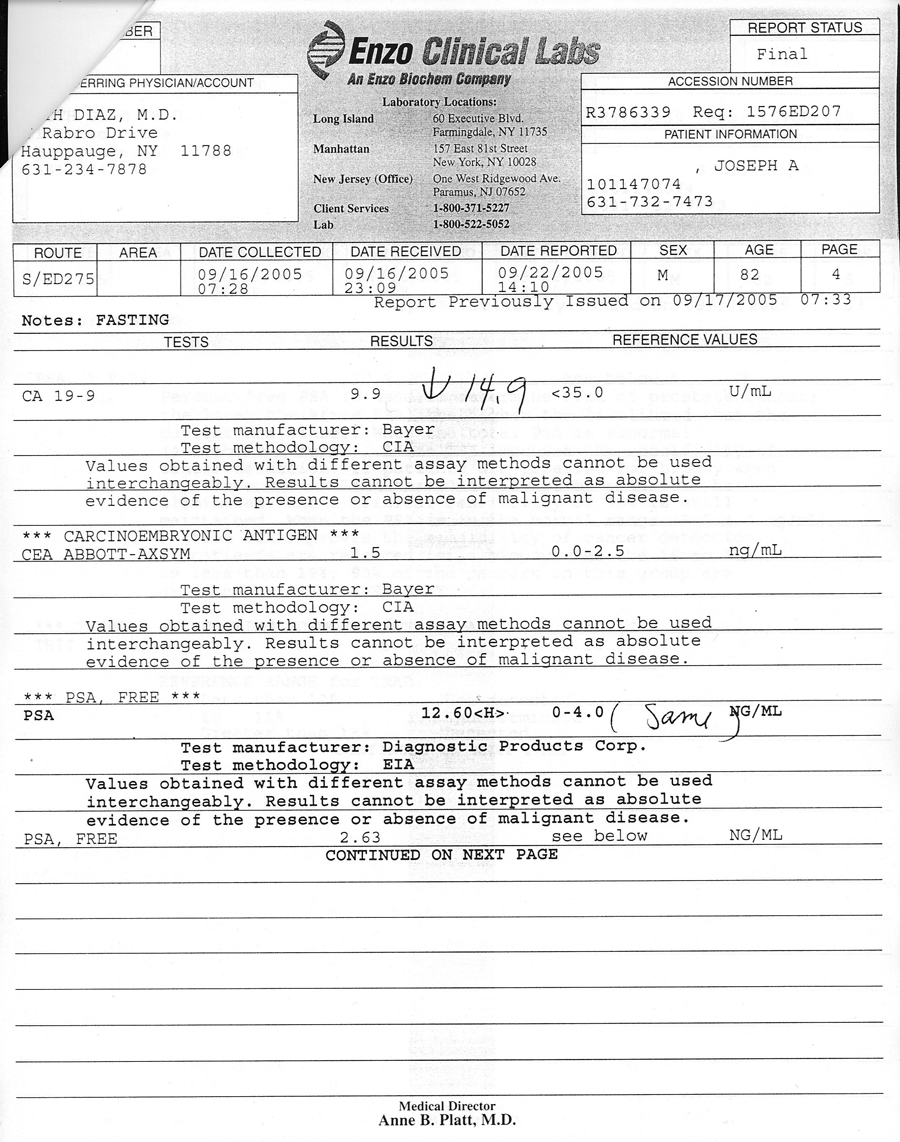