Charlie 61 yo, Juvenile diabetic. Dec 28 2000, dx with large mass on panc. head, invading portal vein, common bile duct, pancreatic duct, duodenal wall, total jaundice, bilirubin at 3.6, aborted whipple or any other surgery due to extensive mass, we were not given the ca19-9 levels. They started him on small doses of palliative radiation and chemo. Nutritional program started first week of January 2001. The negative side affects from rad and chemo were minimized or gone. By April 4, 2001, 3 months, blood chemistry was basically perfect and there was no evidence of any cancer. In addition to his feeling great, his diabetes was gone, glaucoma was gone and pressure reduced from 24 with medication to 15 without medication. Blood pressure was now normal without medication as well. During the summer, he had an infection and the doctor ordered Charlie to stop all vitamins, then the infection grew worse after stopping the vitamins. They gave him strong doses of chemo, he passed away on Sept 12, 2001, autopsy showed no evidence of cancer, it was suspected that the infection was dead cancer cells and if it were left alone, it most likely would have resolved itself.

Charlie was a wonderful sincere gentleman, he will always be in our hearts .

I wanted to write about my experience hoping that it be an encouragement to others.

On December 27, 2000, I was rushed to the hospital with chest pains, rapid heart beat and jaundice.

The doctors told my wife and me that I had a heart attack and that the jaundice was caused by a cancerous tumor on the pancreas. It was not operable, but they suggested radiation and chemo treatments, and that there was only a 20% chance that it would shrink the tumor enough so that it could be surgically removed.

Needless to say, this was shocking news, but our faith in God gave us a peace that is beyond human understanding.

My daughter told me about her husband's brother, who had been treated for cancer in the throat area, and after radiation and chemo treatment, he was taking a vitamin treatment introduced by Fred. The vitamin therapy seemed to speed up his recovery and now, about one year later, he is cancer free and living a normal life.

I was not interested in taking all those pills, since I was also taking so much medicine for the heart problem, diabetes and glaucoma. However, my daughter bought a supply and encouraged me to take them. She even packaged them for me to take with each meal.

I took them regularly and whenever I had a stomach problem or questions, I'd call Fred and spend a lot of time on the phone as he explained what to do to get me through the problems. This vitamin program helped minimize the side effects of the radiation and chemo.

Three months later, April 4, 2001, I went for a CAT scan and upon seeing the doctor a few days later, he said, "miraculously, the tumor has disappeared." I believe God used Fred's program to help accomplish this miracle.

Fred has a copy of my CAT scan report from January 10, 2001 where it showed the extensive spread of my cancer and the April 4, 2001 CAT scan report which shows no evidence of cancer.

I would also mention that my glaucoma has greatly diminished since taking the vitamin program. The pressure used to be 24 for many years and is now 15.

I do hope that people in the medical field, as well as cancer patients, will see the good in Fred's work. I believe that this program is a great accomplishment and should be regarded as such.

My wish is for this information to help as many people as possible in their fight against cancer.

UPDATE: 9/22/01 - Charlie's doctor said that even though he showed no evidence of cancer, he still wanted Charlie to take the chemo (Gemzar) as a precaution. He started the chemo during the last week of August 2001. On September 12, 2001, Charlie had passed away, the doctor wrote the cause as complications to pancreatic cancer. The family did not believe that, so they ordered an autopsy, which revealed that he had no cancer in his body and instead, his heart was filled with blood clots, which were caused from the chemo (Gemzar).

So, Charlie died from a heart attack, caused from Blood clots generated by the GEMZAR, not cancer.
There was "NO EVIDENCE OF CANCER" in his body. 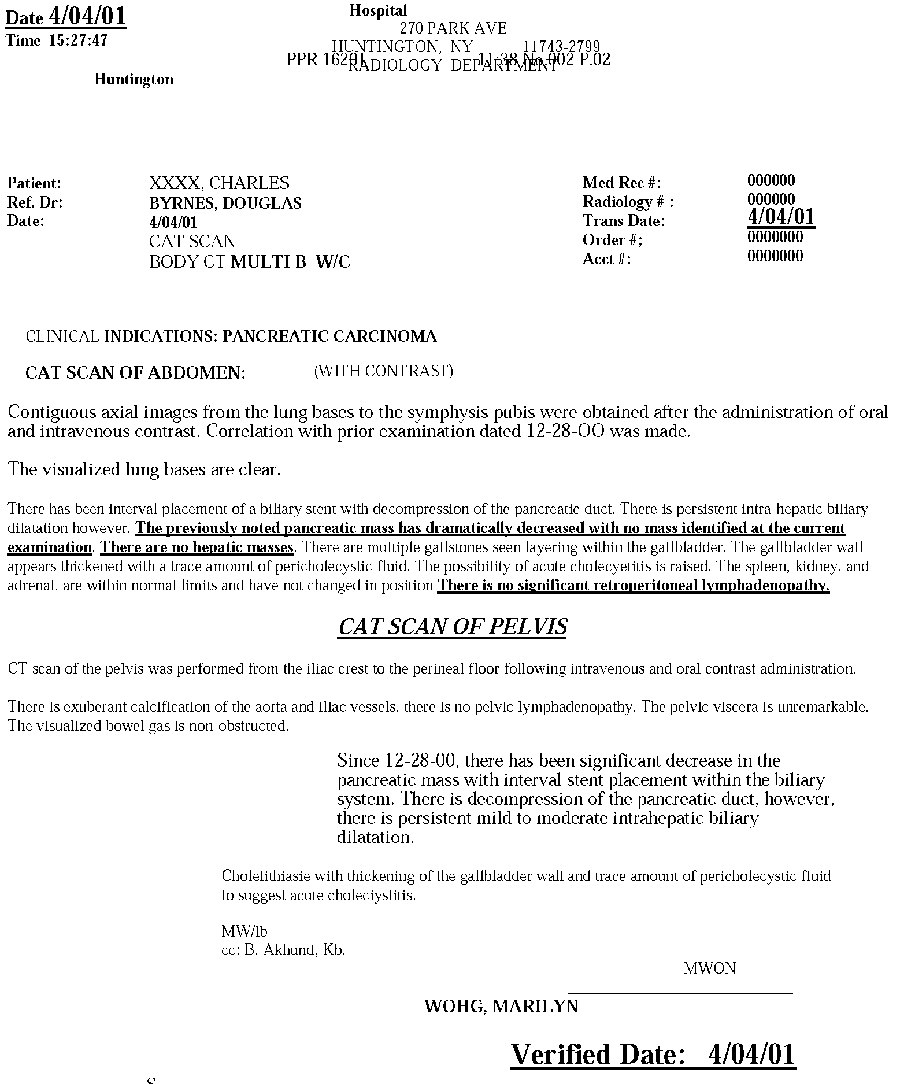 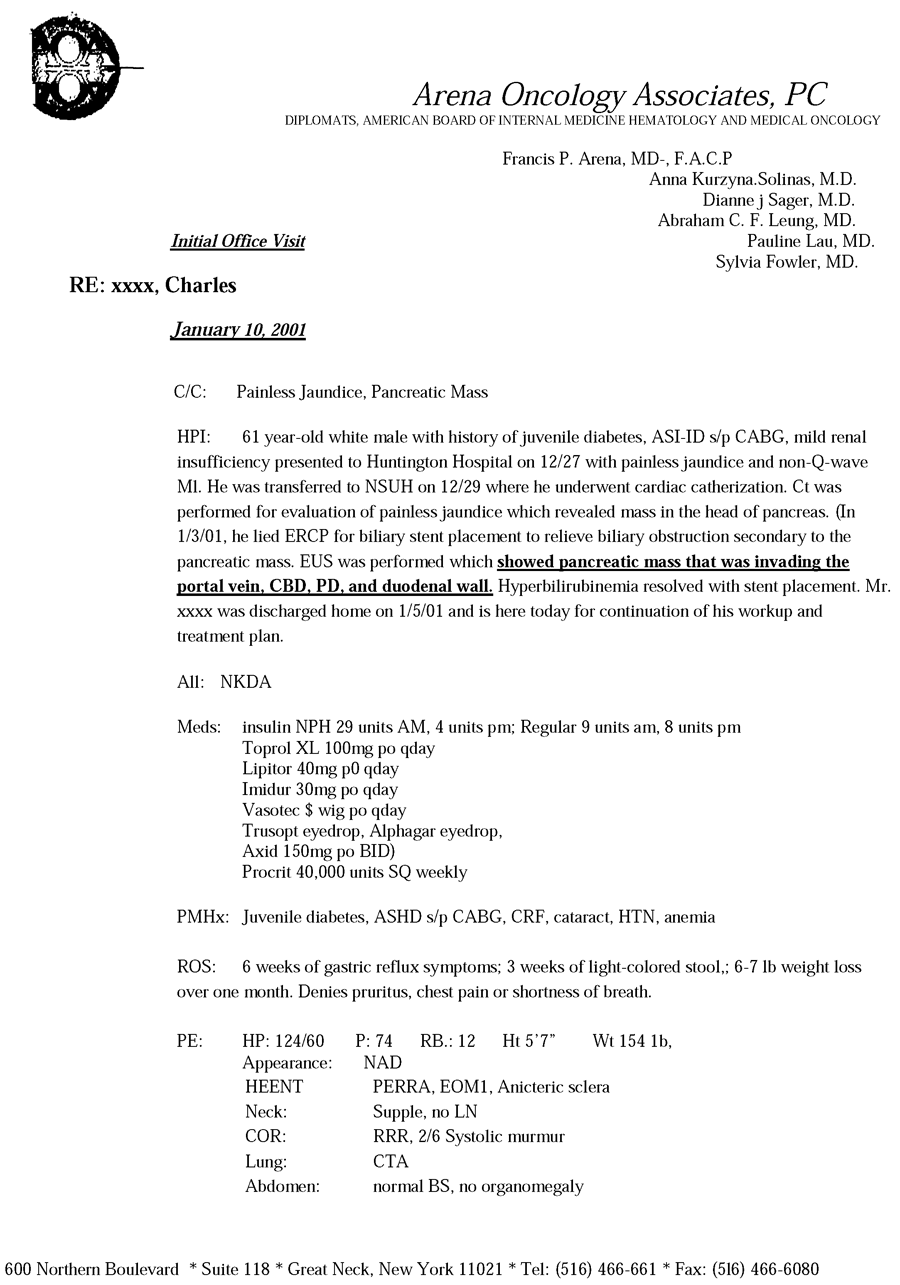 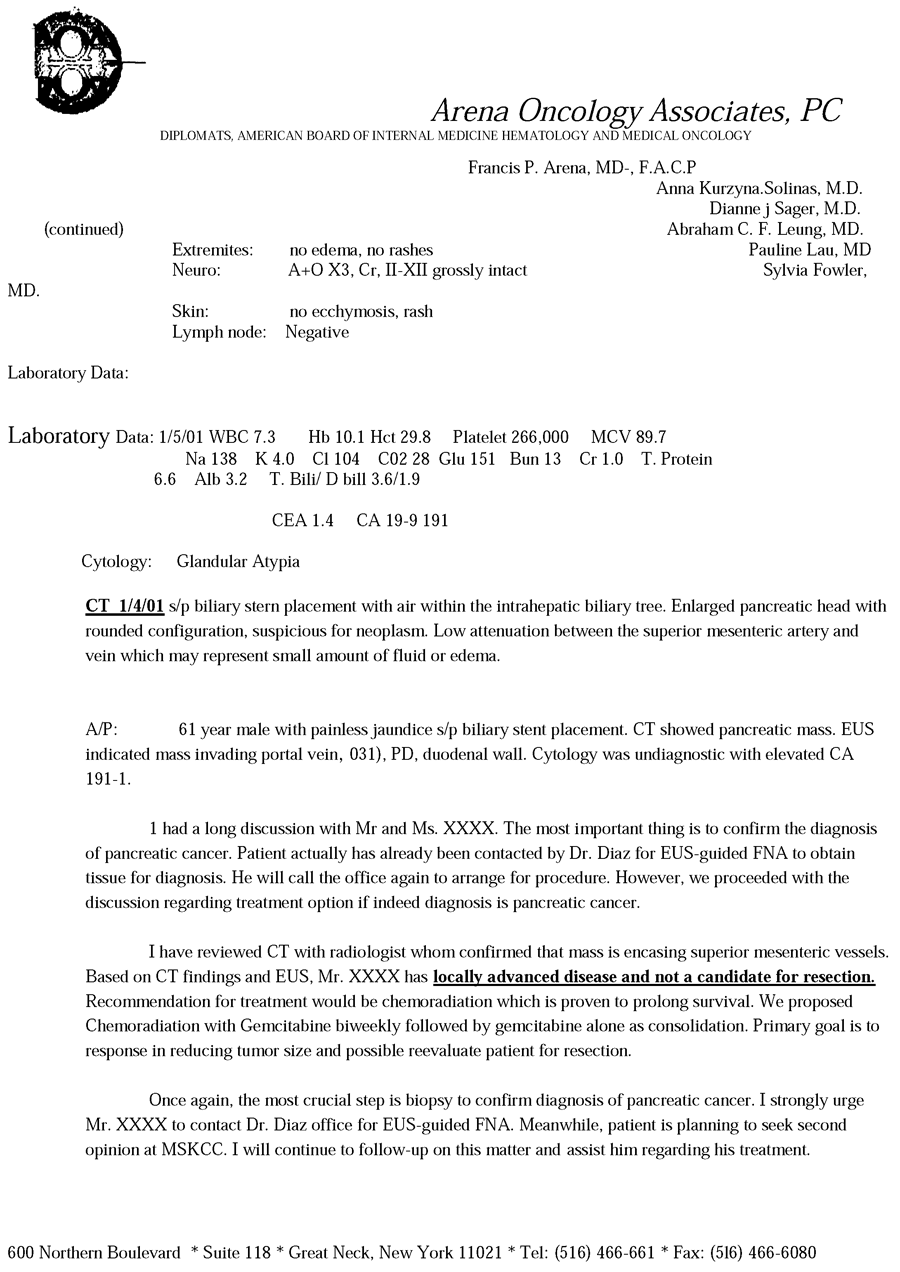