Cheryl, born 1960, Dx in 1998 yo with both advanced 4th stage Ovarian cancer and Hepatitis "C". After devastating news, she did not choose any options of chemo or radiation, surgery was not an option because of its advanced stage. She started the nutritional program in January 2000. Symptoms diminished. As of today, the Hepatitis "C" has been gone for a long time, the cancer is no longer evident in most areas, a lymph node in the neck is annoying her at the moment, but in control, otherwise, she feels great and does what she normally does and eats as she normally does.

Update: 4/3/03 - Cheryl had a problem with a lymph node in her neck, upon a biopsy, it became worse, they radiated it to reduce the size and she is fine now.

Fred Eichhorn suggested I write to you explaining a little more about my health condition and how Fred's vitamin plan has helped me. At the time this all began I was 36 years old. In March 1999, after complaining to my general doctor about pains I was having in my abdominal area, she examined me and said she thought she may have felt something and sent me to have an ultra sound. Within a few hours of having that test she called me at home to tell me they found two grapefruit sized masses on my ovaries and advised me to see a cancer specialist the very next day! Needless to say I was devastated. I thought I had a gastrointestinal infection and here I was about to go see a gynecological oncologist!

After 2 different doctors opinions it was determined that they would not biopsy for fear of disturbing the masses, so we decided to have surgery to remove them. Surgery was performed in May 1999, at which time I was officially diagnosed with Ovarian Cancer at Stage II. Due to the masses having spread to my uterus, they performed a hysterectomy. They also did a wash of my abdominal area and a few days later found cells which raised my diagnosis to a Stage II C.

They wanted to start me with heavy doses of chemotherapy right away. However I had complications from the surgery that sent me back into the hospital, which delayed my chemo. I finally started in June 1999 and had 6 treatments, once every 3 weeks. I lost all my hair and was very sick. During my 5th and 6th treatment I noticed my lymph node on the left side of my neck was enlarged. My oncologist thought it was just from a cold. In December 1999 my CT scan showed enlarged lymph nodes in my abdominal area. My surgeon wanted to perform more surgery, a "second look" surgery, to dissect and see if it was cancer. They also biopsied the node on my neck. My doctor came into the room obviously very upset and said the results came back positive with cancer and that this was very, very bad. This meant the chemo didn't work. It also raised my cancer to a Stage IV. The surgeon said no surgery (they figured it wouldn't help since they assumed my cancer was spreading), and along with my oncologist suggested more chemo, offering a success rate of only 20%!! I was devastated and determined to not go through more chemo.

I wanted a higher quality of life than being sick with chemo, plus I was determined to beat this. I told my oncologist thanks but no thanks, I'm going to recover with alternative treatments. He said he wouldn't advise it, but respected my decision and asked if he could monitor me. He also said he didn't want to lose any ground, in case I changed my mind and wanted more chemo. I began a macrobiotic diet, which is eating lots of grains, vegetables, sea vegetables and beans, organic only, no meat, no dairy, no refined products like flour, wheat and sugar. I also heard about Fred's vitamin plan through my partner's mother. Her cousin had pancreatic cancer and was making a recovery with the vitamins. I began taking it in January 2000. I went immediately to Dosage #4. In March of 2000 I was waiting for my doctor to give me the results of my first CT scan taken after I began the vitamin plan. My oncologist came walking in smiling and calling me his "miracle girl". He said my scan showed no new growths and no enlargement of existing growths, making me "stable". He said he would have hoped for this diagnosis had I taken more chemo. He admitted he had nothing to do with my being "stable" and said to keep doing whatever it is I'm doing because it's working. He initially showed interest in the vitamin plan, but never followed up with a call to Fred. He is definitely thrilled that I'm recovering, but not willing to share my method with his patients.

I resumed my life and moved to New York. I had a recent CT scan performed in June 2000, and it still shows the same lymph nodes are enlarged but not growing or spreading, which means I am still "stable". They are currently comparing CT scan films to determine how much the nodes have shrunk. Needless to say I feel terrific, full of energy and no pain. Fred's vitamin plan and my new nutritional habits are absolutely what is curing my cancer.

If you have any questions please feel free to call me,
All the Best,
Cheryl M. 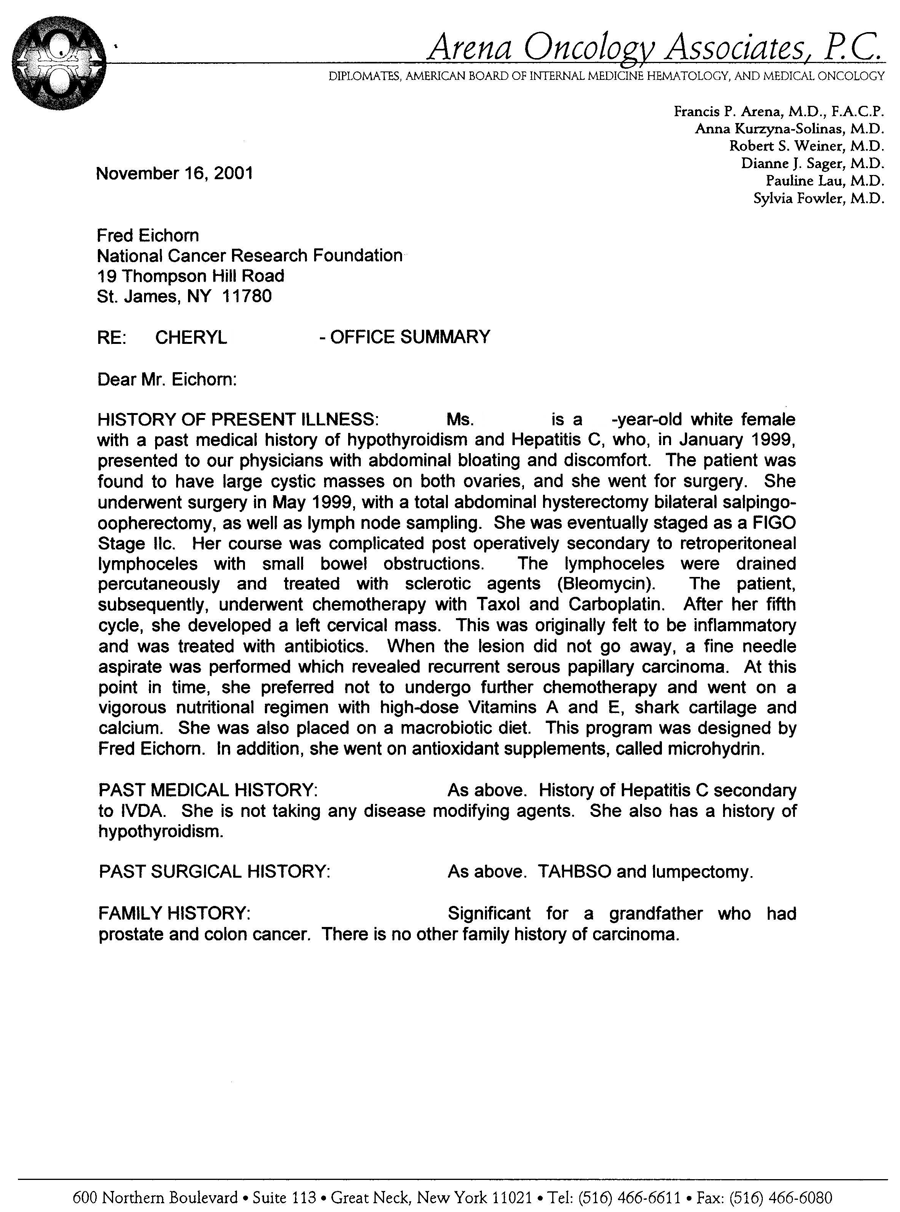 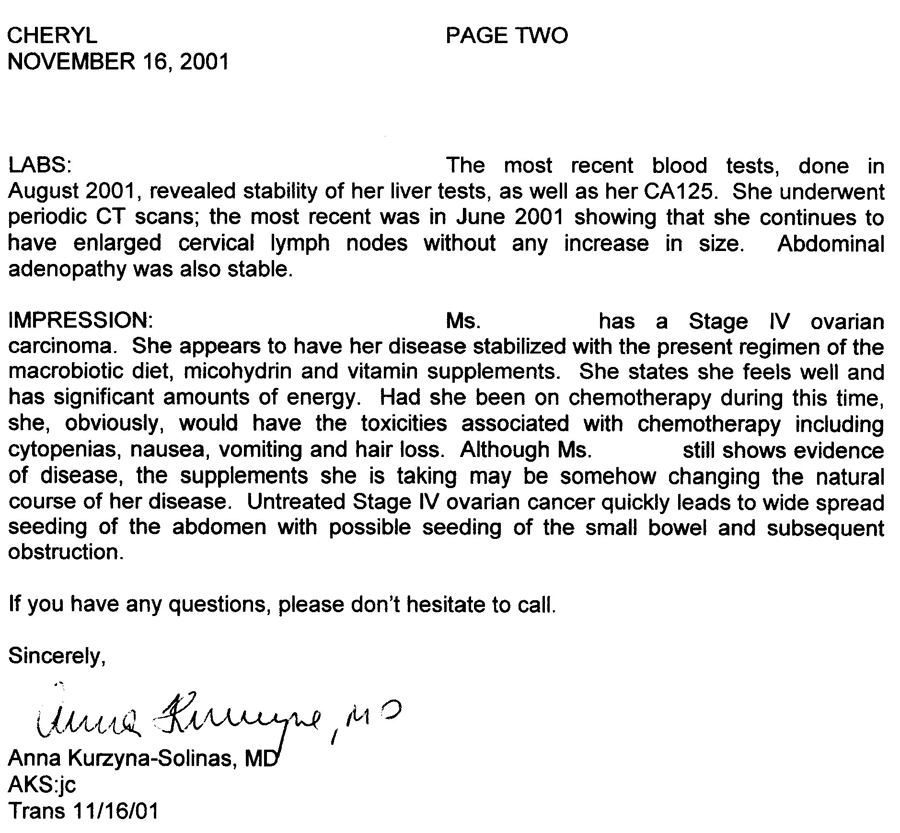