A 49 year old man, named Joe, came to me in Nov 2005 with lung sarcoma cancer and a relative sarcoma tumor on his left hip, but not invading any bone nor muscle. The hip tumor is the size of two large fists. In Nov 2005, his surgeons said that they could not do surgery, and gave him 3 weeks to live, stating that he would not be here for Christmas 2005. They added that even if they could do the surgery on his lung, he would have 15% chance of recovery, so, they refused to do surgery on him. With my program, he is doing GREAT today !!!!!!!!!!!!!!!!!!!!

In Nov 2005, he came to see me, started the program, he decided to take 16 doses daily, his attitude was "Do or Die". I sent him to a different doctor who totally understands this program. By Jan 4, almost half the cancer was necrotic dead. For the past three months, he was coughing up tumors, about 32 dead tumors so far, pathology confirmed dead cancer tissue. He is storing it in a special refrigerator for any doctor who does not believe it. He had some breathing problems a week ago, turned out that it was phlegm from dead tissue in his lung, cleared up again and he is great again.

April 10, 2006 PET scan showed that 90 - 95% of the cancer was dead and over time, they indicated the tumor would probably diminish on its own, and admitted that they never saw this happen before.

The tumor on his hip was also necrotic with 95% dead tissue, and they feel that he should have the dead cancer removed because of the ball on his hip was starting to look like a large pimple forming a head, they did not want it to burst with pus coming out, and preferred surgery before that happens. We are working on getting a surgeon for that.

Attachments (see first three attachments):
1 Nov 15 2005 as noted above
2 Jan 4, 2006 cancer was dying and showed almost 50% necrotic
3 April 10, 90 -95% necrotic tissue ready for surgery to remove dead cancer in hip, lung will resolve itself without surgery, he is fine today.

The surgeon who originally turned Joe down for surgery has now agreed to do the surgery.

On Monday, May 1, the surgeon told Joe:

"This surgery will not change your outcome. It is unclear why the tumor went necrotic like that, how ever, you will not live longer due to removing the tumor from your hip because the lung cancer is so large, your lung has collapsed, and even though you coughed up the many tumors, which is unclear how that occurred, we cannot remove that large tumor and it will only get worse. I will need to give you spinal local anesthesia because you will die on the table if we use conventional anesthesia. This will be a risky and difficult surgery because of your multitude of problems relative to the lung cancer"

Joe was a bit depressed over that. We explained that the doctor never had any experience using our methods, we needed to educate the surgeon, as I believe the surgeon truly cares and is not an ego nor self-centered person. I liked this surgeon. I told Joe that his job was to help educate this surgeon.

Tuesday, May 2, also my parent's 58th anniversary, the doctor said that Joe's lung was not showing much air movement and was concerned. However, Joe felt great and he was at 94% lung capacity, which was good.

That afternoon, Joe started coughing very hard. The tumor popped out after strong coughing. It was hard and compacted from being compressed to go through the bronchial passage. It was 1 ½ +" long, ½ high almost and inch wide. It was that tumor in the lung which surgery was not an option. It came out and he did not need surgery, it was out.

They called for the doctor, nurses said he was gone for the day, and they were not interested, she took it home, took pictures. Wednesday, the surgeon went nuts over it, he clearly said, "In my 25 years as a surgeon, I have never seen anything like this, ever." He ranted and raved over this, and it was sent to pathology. As of this morning, Tuesday May 9, his breathing is great, plenty of air flow in his lungs, his oxygen is 96%, which is great, and they will remove the hip tumor (which is now basically totally dead) in a matter of a day or so. He basically improved so much that all the major concerns went out the window, the surgeon stated it is now just a simple routine surgery.

So, in the next few days, we expect to see some results.

I hope that you are all doing great !!!

The doctors were expecting between 3 - 3 ½ hours, and was concerned that Joe might not be able to come off the ventilator. The anesthesiologist flatly turned him down, indicating that Joe would most likely die on the table. They found a different anesthesiologist who handled it, this one said, "I will approach it with caution, but I believe that we can make it work."

He coughed up a large tumor from his lung 1 ½" long, 1" wide, ½" high, spit it out, confirmed by pathology as dead cancerous tumor. That was his 33rd tumor he coughed up from his lungs, these were coughed up after the April 10th PET. Doctors said " I've been a surgeon 25 years, I have never anything like this !!!" yet, he had no interest to know more about what Joe did.

Long story short, Joe went in for surgery, May 10, 2005 at 6:30 PM. It took two hours and was basically uneventful. Spinal anesthesia, opened up the hip, lots of pus came out, they transfused some blood, the tumor had backed away from everything and was not invading much if anything at all. The surgeon's original concern was relative to amount of muscle would need to be removed and how severe the artery and nerve roots were affected. There was no invasion of anything, the necrotic tumor was 6.5 pounds. The surgeon said he removed just a little bit of muscle tissue, a lot less than he ever would have expected, and everything else was fine. The surgeon said that it would be 3 to 4 weeks before Joe would be able to put his weight on the floor with physical therapy.

Joe was awake almost immediately after surgery was finished and said he felt fine, he wanted to eat dinner. The next day, he ate a full lunch. On May 15, Monday, he walked without assistance to the bathroom and back, went home on Tuesday the 16th. Everybody was happy, it was a great day for Joe and Janice. Healing is fast, no redness, no swelling, no irritation. He is not on any pain meds except Percocet once in a while.

He coughed up another tumor, #34, not quite as big as #33, but still impressive.

Four days later, 5/20/06, he went to his son's College Lacrosse playoffs, sat in a wheel chair to avoid walking in the fields.

He went to see the surgeon, healing process is extremely advanced, The following weekend, 5/27/06, they drove to Philadelphia, 120 miles each way, for the playoffs again. He was fine.

June 2, he went up and down stairs, was tired but did well. He developed a Staph infection from the hospital, not sure of origin.

June 5, he was walking throughout the house and outside, he is bored, we need to find things for him to do.

He is getting better every day. July is next PET, that will be interesting. He was fine.

In my literature I wrote: "When you are diagnosed with cancer, you are introduced to yourself, you find out what you are made of."

The following PET scans show where the tumor in the hip was so severe on Nov15, and the lung cancer was quite evident as well.

By Jan 4, it showed almost 50% necrosis, it is darker, which needs to be taken into consideration, the report indicated improvement. 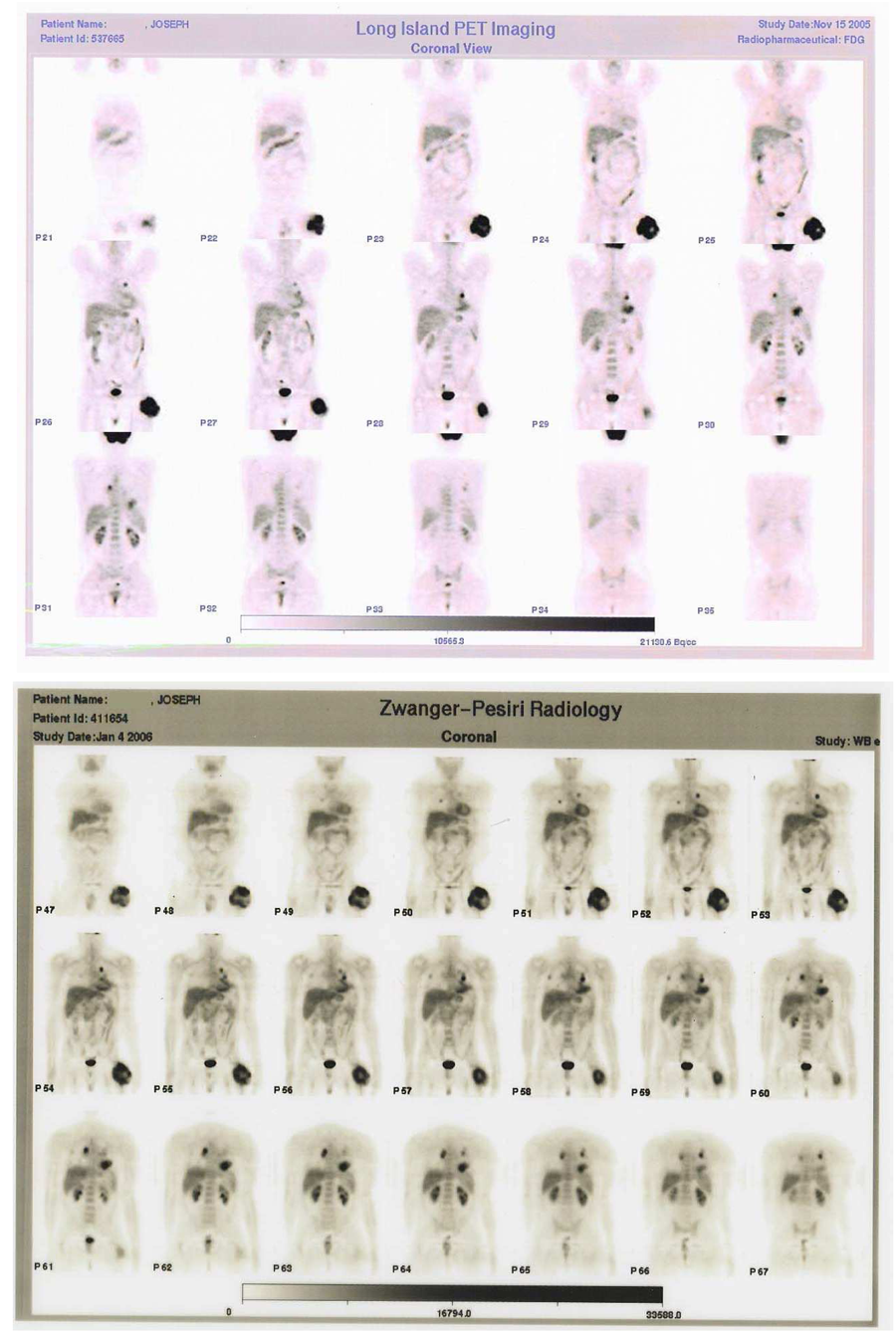 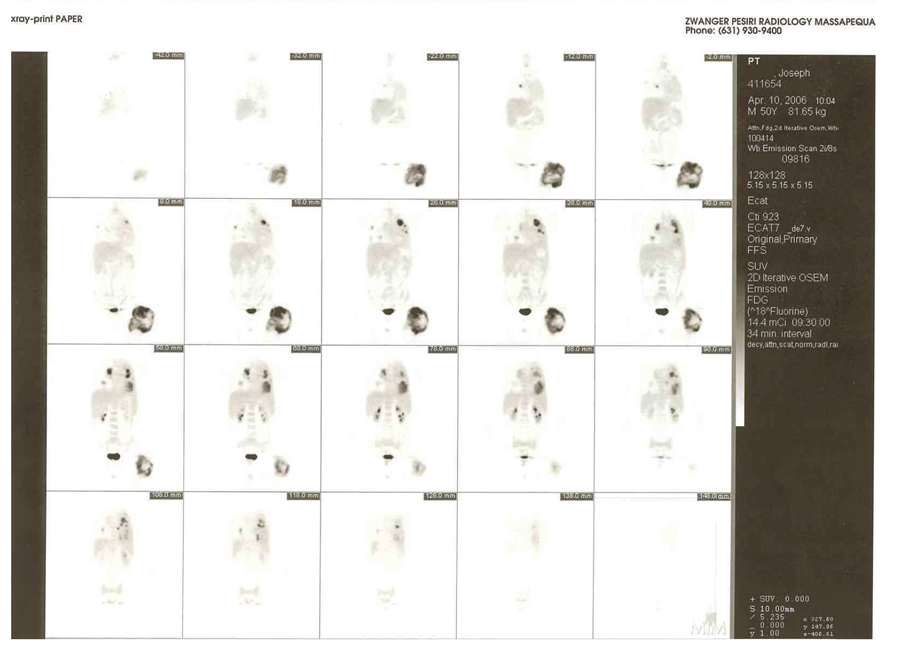 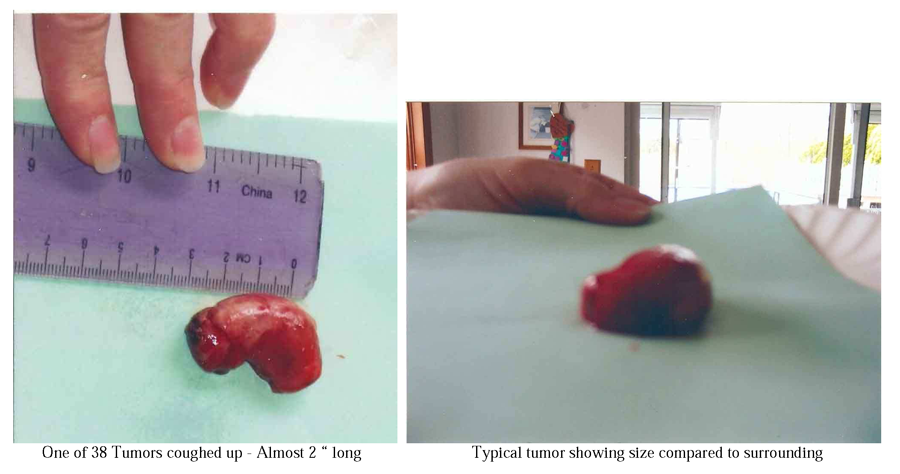